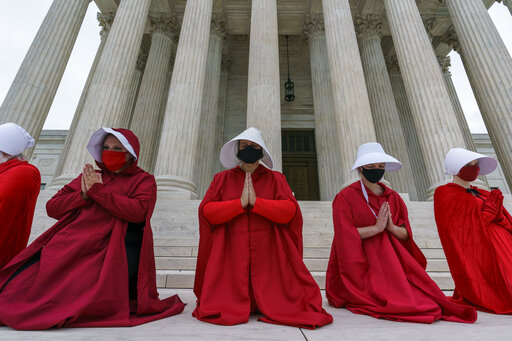 The start of Amy Coney Barrett’s confirmation hearing on Monday has already attracted protests outside the Capitol, including a group of women dressed in the red habits borrowed from the television adaptation of The Handmaid’s Tale.

Barrett is expected to offer praise for her mentor, the late Justice Antonin Scalia, during the hearing before the Senate Judiciary Committee. She is also likely to be challenged on her views on healthcare.

A transcript of Barrett’s anticipated remarks was released to the media on Sunday.

The Handmaid’s Tale is based on the novel by Margaret Atwood. The book and its television spinoff depict a dystopian world where women are brutally stripped of their rights and exploited for reproduction. Protesters dressed in the signature nun’s habit costume of the Handmaids have shown up at protests worldwide since 2017.

Senator Lindsey Graham, the chairman of the Senate Judiciary Committee, said on Fox News Sunday that Barrett will be confirmed no later than October 27. The hearing is scheduled to wrap on October 22.

The women dressed in red capes and bonnets protesting Barrett’s upcoming confirmation hearing are among those concerned about Barrett’s views on abortion rights. Barrett’s opening statement will emphasize that policy decisions should be left up to political branches of government – Congress and the presidency – not the courts.

“Courts have a vital responsibility to enforce the rule of law, which is critical to a free society,” her statement says. “But courts are not designed to solve every problem or right every wrong in our public life. The policy decisions and value judgments of government must be made by the political branches elected by and accountable to the People.”

Barrett is also expected to salute the late Ruth Bader Ginsburg, whose seat she hopes to fill.

“When I was 21 years old and just beginning my career, Ruth Bader Ginsburg sat in this seat,” her statement reads. “She told the Committee: ‘What has become of me could only happen in America. I have been nominated to fill Justice Ginsburg’s seat, but no one will ever take her place. I will be forever grateful for the path she marked and the life she led.”

like
On this topic: (Other)
Ford Reveals Why Killing Sedans Made Sense
These Slugs See with Their Brains

Deputies Respond to Report of Shooting at Courthouse
Recent Posts