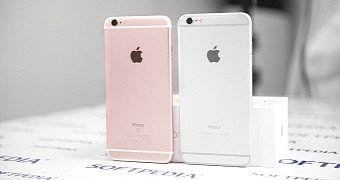 Apple has a hard time dealing with all battery repairs as part of the discount from $79 to $29 following the power management fiasco, and it looks like the company is switching to plan B in the case of older devices requiring more complex servicing.

Cupertino has already suspended battery replacements until March and April because of the limited battery stocks, and now it looks like Apple plans to substitute damaged iPhone 6 Plus units requiring full replacements with the iPhone 6s Plus until the end of March.

An internal memo obtained by MacRumors points out that Apple wants “orders for whole unit service inventory of some iPhone 6 Plus may be substituted to an iPhone 6s Plus until the end of March 2018,” but no specifics were provided as to what models qualify for the replacement and why the company turned to this decision.

like
On this topic: (Articles (En))
Get AMD’s Latest Radeon Crimson ReLive Edition Driver – Version 17.11.4
These 30+ Photos Of Ingo The Dog And His Owl Friends Is The Only Thing You Need To See Today