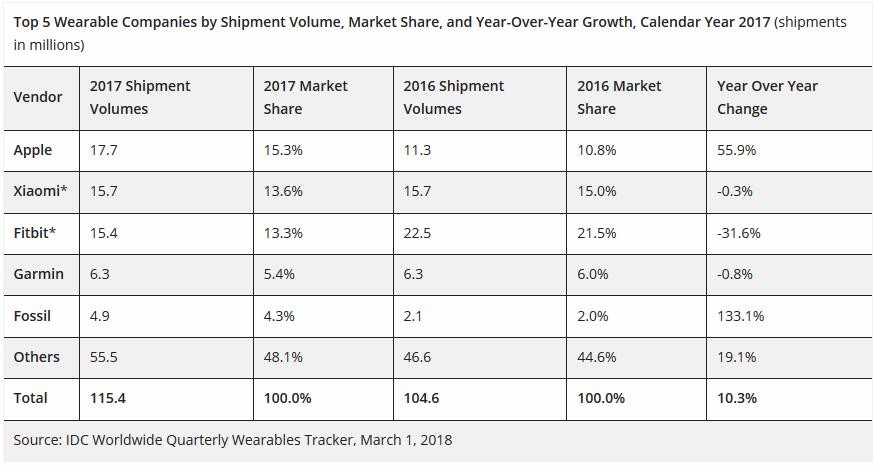 New data provided by IDC for the Q4 2018 and for 2017 overall shows that Apple is now the dominating brand in the wearable market, as it managed to overtake both Fitbit and Xiaomi worldwide.

Apple accounted for no less than 15.3% of the sales last year with 17.7 million sold units, up from 11.3 million units in the previous year. Xiaomi and Fitbit were next with a little over 15 million sold units and 13.6% and 13.3% market share, respectively.

In the fourth quarter, Apple dominated the market with 21% share, while Fitbit was the runner-up with 14.2%. A total of 8 million Apple Watches were sold during the quarter.

IDC says one of the reasons Apple is doing so well in the wearable market is the Apple Watch Series 3, which has been well received by customers thanks to “the convenience of leaving their smartphone behind.” Apple Watch Series 3 is the first model that comes with LTE support and can work independently from an iPhone.

Fitbit also increased during the quarter, and its investments in the Fitbit OS platform are paying off, though there’s clearly so much to improve here.

“Combined with its deep selection of fitness trackers, Fitbit is laying down the foundation for a virtuous cycle involving its own devices and digital healthcare,” IDC says.

Xiaomi, on the other hand, relies on the aging MiBand 2 in the wearables market, but also on new models like the MiBand HRX, smart footwear, and watches for children.

Apple is expected to continue its growth in the coming quarters as the new Apple Watch becomes available in more markets with carrier support for LTE features.

like
On this topic: (Articles (En))
Shopbop Sale Favourites
What it means to see the same numbers