Главная › Other › Donald Trump Approves California Disaster Declaration: “I Am With You All The Way” 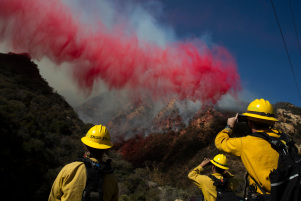 Donald Trump Approves California Disaster Declaration: “I Am With You All The Way”

Californians north and south have endured several days of historic wildfires, and now federal help is on the way. President Donald Trump has approved a disaster declaration for the Golden State, making U.S. government funding available to fire victims in Los Angeles, Ventura and Butte counties.

The White House Press Office issued a news release tonight (read it in full below), and POTUS took to Twitter to say the feds are ready to help “alleviate some of the incredible suffering going on”:

Tonight’s presidential post is an about-face from his Saturday tweet in which Trump blasted what he called the “gross mismanagement” of California’s forests, which he claimed led to the massive wildfires here. After a backlash from first responders, Hollywood and the general public, POTUS back-pedaled today, writing on Twitter, “The California Fire Fighters, FEMA and First Responders are amazing and very brave.”

At least 42 people have died in the Camp Fire up north — the highest death toll for a fire in California history, with hundreds more listed as missing — and two fatalities have been confirmed in the Woolsey Fire that has devastated portions of Los Angeles and Ventura counties.

Today, President Donald J. Trump declared that a major disaster exists in the State of California and ordered Federal aid to supplement State, tribal, and local recovery efforts in the areas affected by wildfires beginning on November 8, 2018, and continuing.

The President’s action makes Federal funding available to affected individuals in the counties of Butte, Los Angeles, and Ventura.

Assistance can include grants for temporary housing and home repairs, low-cost loans to cover uninsured property losses, and other programs to help individuals and business owners recover from the effects of the disaster.

Federal funding also is available to State, tribal, and eligible local governments and certain private nonprofit organizations on a cost-sharing basis for emergency work in the counties of Butte, Los Angeles, and Ventura.

Residents and business owners who sustained losses in the designated areas can begin applying for assistance tomorrow by registering online at http://www.DisasterAssistance.gov or by calling 1-800-621-FEMA(3362) or 1-800-462-7585 (TTY) for the hearing and speech impaired. The toll-free telephone numbers will operate from 7 a.m. to 10 p.m. (local time) seven days a week until further notice.