UPDATE, 9:55 PM: The White House has confirmed that Steven Bannon has been pardoned by Donald Trump. Overall,73 individuals were granted pardons in the last hours of the Trump administration another 70 individuals saw their sentences commuted. Former Detroit mayor Kwame Kilpatrick was among those given a pardon, but Tiger King star Joe Exotic was not — at least not yet.

PREVIOUSLY, 9:21 PM: With just over 12 hours left in his presidency, Donald Trump has granted clemency to his former campaign manager and top advisor Steve Bannon.

As expected, Donald Trump spent the final night of his presidency pondering pardoning friends, political allies and maybe even Tiger King star Joe Exotic. However, while those pardons are yet to be named, the former Celebrity Apprentice host signed the paperwork for ex-Breitbart News executive chairman Bannon. It is estimated that around 150 pardons and more will be issued by Trump with a final list coming early in the morning of Wednesday as

A precise chronicler and scoop scorer of the Trump era, Maggie Haberman of the New York Times confirmed the Bannon pardon late tonight. It was a particularly Trumpian end to his tenure, as the president exercised his unilateral power to grant clemency to those convicted and not convicted of crimes – even if they had fallen from favor like Bannon, who was ejected from the White House in late 2017 for attacking Trump’s offspring in print. 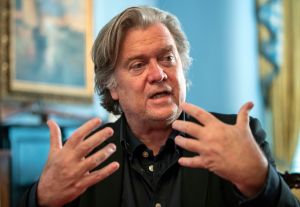 Long dining out on successfully getting Trump into office in 2016 and his so-called populist agenda Bannon and three others were charged last summer with money laundering and defrauding hundreds of thousands of conservative donors. The “We Build The Wall” raised more than $25 million, a fair chunk of which seemed to end up being used for personal use by apparent millionaire Bannon. Of course, despite Trump once proclaiming Mexico would be paying for the wall along the southern border, Bannon plead not guilty and was headed towards trial in May – a trial that is a dead letter office now with any conviction preemptively wiped.

Among other recipients being bandied about are ex-New York Assembly speaker Sheldon Silver and Lil Wayne, who gave Trump an Instagram endorsement of sorts in late October. Wayne pleaded guilty last month to a gun charge. While there may be some well-known names, a number of little known offenders are expected to make the final pardon list – especially those hit with extra long sentences.

The recently re-impeached Trump was rumored to be considering pardoning himself as well as members of his family, but those announcements were not made. According to the New York Times, like any good reality show host, the soon-to-be ex POTUS will consider those pardons right up until the last minutes of his presidency, which ends at noon on Wednesday.

like
On this topic: (Other)
When Algae Learned to Hunt
What to Know About the New COVID Variants | SciShow News

3 dead, 1 in grave condition after rollover crash in Arcadia

Memorable Moments From Presidential Debates Past