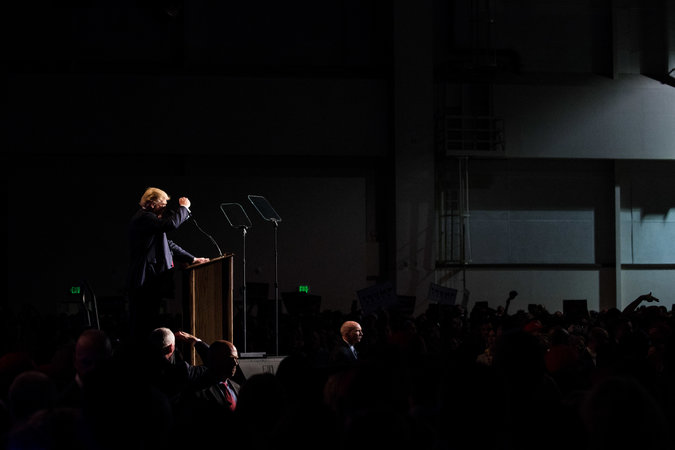 Mr. Trump was quickly ushered offstage by security guards at a campaign rally on Saturday night in Reno, Nev., before returning to the the stage not long after.

RENO, Nev. — In a startling scene, Donald J. Trump was rushed offstage by members of his Secret Service detail during a rally on Saturday night in Reno, Nev., after a person in the crowd shouted that someone had a gun.

A man thought to have the gun was apprehended, but no weapon was found, the Secret Service said, and the man was released. Reporters from The Guardian and KRNV, a Reno television station, who interviewed the man reported on Twitter that he had been holding a “Republicans Against Trump” sign.

It was Mr. Trump’s next to last rally in a long day that began in Tampa, Fla., as he makes his final arguments to voters before Tuesday’s election. More than a half-hour into his speech, he noticed a disturbance in the crowd in front of him. “We have one of those guys from the Hillary Clinton campaign,” he told the crowd. “How much are you being paid, fifteen hundred?”

About 30 seconds later, he gazed out into the crowd at another commotion from the same area.

One attendee, Donald Newton, told The Reno Gazette-Journal that he had witnessed a man holding a sign and approaching the stage.

“He had something on his belly — I don’t know what it was,” Mr. Newton said. “Somebody yelled ‘gun,’ and everyone jumped on him.”

Just then, two members of Mr. Trump’s security detail raced toward the Republican presidential nominee, and one of them grabbed him and forcibly escorted him away from the lectern.

With Mr. Trump off the stage, some in the crowd in the Reno-Sparks Convention Center grew confused and panicked.

“What’s going on?” asked one woman, leaning over the metal barricades to inquire if the news media had any information. “Are we in danger?”

Scenes From the Trump Rally in Reno

Scenes From the Trump Rally in Reno

“Nobody said it would be easy for us,” he said. “But we will never be stopped. Never. Ever.”

Rallies for both Mr. Trump and his opponent, Hillary Clinton, are protected by multiple layers of security, including metal detectors and officers searching bags at every entrance.

Mr. Trump’s rallies frequently attract protesters, and Saturday was not the first time that Mr. Trump’s security agents had sensed a potential threat and raced to his side. In March, a group of Secret Service agents rushed onstage and formed a protective ring around the candidate during a rally in Ohio, after an audience member ran toward him. Moments later, the agents left the stage and Mr. Trump resumed his speech.

Despite the Secret Service’s assurance that no gun had been found, the speaker who gave the invocation at Mr. Trump’s final rally of the day, in Denver, asserted that the candidate had been in grave danger and that the news media was to blame.

“Tonight I think the hate a lot of the media raised against him caused an attempt of murder against him in Nevada,” he said.