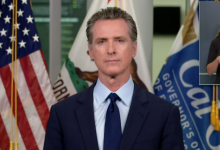 The Entertainment Union Coalition is hailing a bill signed into law by California Governor Gavin Newsom that will make it easier for workers to borrow from their employer-sponsored pension plans. EUC members include SAG-AFTRA, the California IATSE Council, Laborers Local 724, and Teamsters Local 399.

“In these difficult times, our members across California need access to their retirement funds to support themselves and their families during the current COVID pandemic,” EUC said in a statement, noting that the new law “will allow them to do that without incurring a penalty or unintended income tax payments.”

The legislation – AB 276 – which was authored by Assembly member Laura Friedman, passed through the California Legislature with unanimous support, and brings California into conformity with provisions of the federal Coronavirus Aid, Relief and Economic Security (CARES) Act, which removed penalties and improves access for those needing to take a loan from their employer-sponsored defined contribution plan. While California automatically conformed to some provisions of the CARES Act, it did not with others, creating the possibility that Californians taking a loan from their qualified retirement plan that met the requirements of the CARES Act could find themselves facing a tax penalty and unintended tax consequences for California state purposes.

EUC members say they became aware of this potential problem early on in the pandemic. “When the California economy shut down in early March, the entertainment industry went from close to 100% employment to close to 100% unemployment,” they said in a statement. “Consequently, many entertainment industry workers turned to their employer sponsored defined contribution plans (which are labor-management ERISA plans) to support themselves and their families. Since mid-March those plans have seen thousands of members withdraw millions in loans from the Motion Picture Industry Pension & Health Plans.

“The concern was that these members, thinking tax penalties had been removed under the CARES Act, would find themselves suddenly and unexpectedly confronted with a California tax penalty for their loan withdrawal. EUC immediately sought to work with Assemblywoman Friedman, the members of the California Legislature and Governor Newsom, to ensure this ‘trap for the unwary’ would not happen.”

The new law is effective immediately and applies to loans from an employer sponsored qualified retirement plan during the 180 day period beginning on March 27,2020.

like
On this topic: (Other)
Jeep Wagoneer’s Complex Lighting Display Is Seriously Cool
What Do We Know About T Cells and COVID-19 Immunity? | SciShow News

Kenneth Lonergan and Lucas Hedges talk ‘Manchester By The Sea’