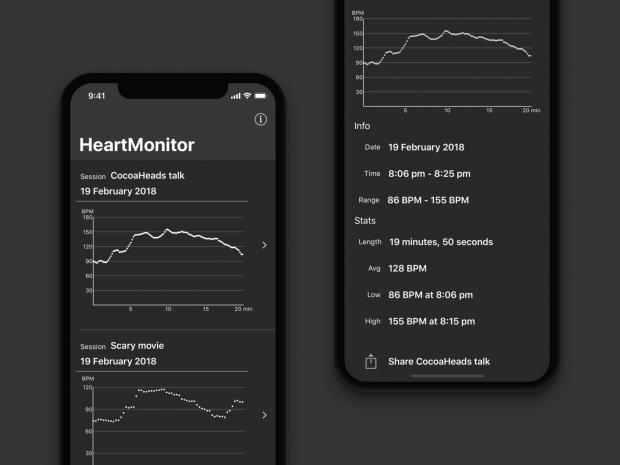 If you own an Apple Watch and you have ever wanted to record your heart’s rate and rhythm in nervous situations, such as when you’re stressed, there’s now an app for that, and it’s free.

Australian iOS and watchOS developer Zachary Simone created an app called HeartMonitor that might save your life someday if you’re an Apple Watch wearer. At its core, the app is designed to record so-called sessions of your heart rate from the Apple Watch heart rate sensor without starting an workout.

As the developer notes, HeartMonitor might come in handy in a bunch of nervous situations, such as when you’re watching a horror movie or when you give a presentation or conference talk to your bosses, as well as in other moments of intense excitement. The app will record your heart rate and save the data on your iPhone.

“HeartMonitor is useful for monitoring your heart rate in nervous situations, such as while giving a conference talk or presentation, in the dying moments of a football game, or while watching a horror movie. HeartMonitor is also useful if you want to keep an eye on your resting heart rate for short periods of time,” said the dev.

Free to download on your Apple Watch and iPhone

Zachary Simone said that he created HeartMonitor due to the lack of a dedicated heart rate monitoring mode in watchOS, Apple Watch’s operating system, in an attempt to help more people discover if there’s something wrong with their hearts before it’s too late. Of course, the heart rate data can be interpreted by a physician.

All the heart rate recordings can be named depending on the occasion they were recorded in the companion iPhone app, which will present you with a list of recorded sessions that include detailed info and statistics. HeartMonitor is free to download for both iPhone and Apple Watch and you can grab it right now from the Apple Store.

HeartMonitor for iPhone and Apple Watch

I started a Watch workout before stepping on stage for my

like
On this topic: (Articles (En))
Daughter Finds Box With 30,000 Never-Before-Seen Negatives In Attic, Her Jaw Drops When She Develops Them
16 Jokes By Stephen Hawking That Still Make Us Laugh