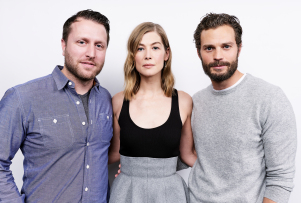 During a recent conversation promoting his awards season contender, A Private War, Jamie Dornan talked about the importance of being timely, especially with this pertinent story (the first narrative film from documentarian Matthew Heineman) of journalists on the front lines of reporting and photographing major conflicts in the Middle East and around the world.

Dornan said, “Our director said something interesting very, very early on, one of the first Q&As we did about how you want your movies to be timeless and timely… even in the time from when we made it to release, it became even more timely in terms of very obvious and awful examples of the treatment of journalists, but also with respect to what’s still going on in Syria.”

“Marie died there in 2012 and here we are 6 years on and over half a million to billions have been killed within that regime and nothing truly changing you know, so I think from both standpoints is the treatment of journalists and how journalists are perceived by, you know, very high powered people — without naming names,” he said without mentioning the words Donald Trump directly. “Journalists are being treated like terrorists… I mean, it’s incredible, but it’s good to have a film out there that is in support of journalism and homage to real journalists and the people really seeking the truth and doing whatever it takes to do so and that’s a nice thing to be a part of.”

In A Private War, which comes from new distributor Aviron and has been nominated for two Golden Globes, Dornan plays photojournalist Paul Conroy who covered many conflicts around the Globe, notably in Syria, with journalist Marie Colvin, portrayed brilliantly by Globe nominee Rosamund Pike, who died tragically while reporting in Syria, an incident where Conroy was by her side but did survive. It was the first time Dornan has played a real person who is still alive, not only alive but also on the set. “I loved that process. I might not have loved that person had it been someone else, but it happened to be Paul and Paul is one of the most open-hearted, loving, gregarious, fun, intelligent men I’ve had the pleasure meeting. So, to have him there and be expressive of all those traits that he has at all times, was incredible and not only for me but for Rose as well and for Matt to have Paul’s support throughout this process was incredible. I know it was so hard for him at so many points, but he was unwavering in his support of us and what we were trying to achieve of the film and you know, it mustn’t be easy when you’ve got a group of people who you don’t know particularly well who’re trying to depict your best friend’s life alongside your own life and with subject matter that is obviously still so close. I mean, Marie only died 6 years ago, it’s all very recent history. So, to have his support, I think for all of us is just hugely beneficial,” he said.

Dornan points to the irony that despite the bravery and dedication of Conroy in covering so many parts of the Globe including Syria, he is on all sorts of watch lists, and not allowed to travel to the U.S. even though he did hatch a plan to try to attend the film’s premiere earlier this Fall in L.A. He got to Canada but wasn’t allowed to cross the border into the U.S. Dornan admires that devil-may-care quality but says he could never try to get into a country where he knew they didn’t want him. That is where the actor and the real-life subject he plays are different, and Dornan thinks it is so great, the way Conroy has lived his life out of necessity for so long.

Dornan has had a busy fall, not only in A Private War, but also in a supporting role as Will Scarlet in the recent Robin Hood reboot, and a well-reviewed turn as Danny Tate in HBO’s Herve Villechaize movie, My Dinner With Herve, as well as the mini-series Death And Nightingales for BBC 2. He recently finished shooting a new Drake Doremus indie opposite Shailene Woodley and Sebastian Stan, an experience that allowed him to do a lot of improv, further stretching his talents in new directions.

A Private War earned Dornan perhaps the best reviews of a movie career that started with a small part in Sofia Coppola’s Marie Antoinette about 13 years ago, but has clearly been dominated by his role as Christian Grey in the Fifty Shades Of Grey trilogy of movies that didn’t win the hearts of critics, but made him a heartthrob for millions of female fans nonetheless. There is a downside to being in such a notorious film franchise and he knew that going in, but the benefits have outweighed the negatives. Of course, it has to come up when talking to Dornan but he knows the game.

“Listen, I think it’s given me so much beyond finance-wise, I mean that opportunity to then do the movies that we’re talking about like Anthropoid and A Private War, movies like that have so much heart and mean so much to me. I would not have been given those opportunities if I hadn’t done Fifty Shades,” he said.

“It was a little bit bulletproof in terms of how it was going to be received from the likes of yourself and other critics,” he continued. “I think it had such a strong fan base so passionately supportive of it that…I almost think it being received as not great fueled them. I feel like they almost got off on that because it was such a strong example of movies that are made for the fans and these people who have devoured these books, and these characters mean so much to them.”

“I know these fans pretty well and for the most part I think it satisfies them and that was kind of the aim you know,” he said while adding that both he and co-star Dakota Johnson are now doing really exciting work since those three films, labeling it a testament of what those movies gave both of them. Does being recognized every now and then on the street as Christian Grey, and not Jamie Dornan the actor ever bother him? “Sometimes and I struggle with that. I might be fighting this my entire career. I hope not. You just want to keep trying to improve yourself and better yourself,”  he said looking forward with confidence and thanks for film roles like A Private War.

like
On this topic: (Other)
Everything You Ever Wanted to Know About Poop
What If We Killed All the Wasps?