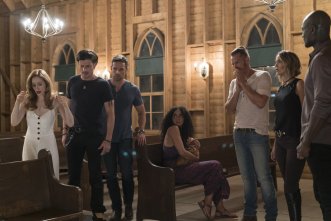 The current second season of NBC’s series Midnight, Texas will be its last. The network has opted not to order a third season of the supernatural drama based on the books by author Charlaine Harris, which producing studio Universal Television is shopping to other outlets. NBC also will not be picking more episodes of multi-camera comedy Marlon, starring Marlon Wayans, which ran for two seasons in summer 2017 and summer 2018.

Midnight, Texas, from Universal TV and David Janollari Entertainment, started with a 10-episode first season, which aired in summer 2017, ranking as the No. 1 broadcast drama series of the summer among adults 18-49. The show was renewed for a 9-episode second season, which was moved in-season, debuting this past October.There was a change at the helm of the series heading into Season 2, with Eric Charmelo and Nicole Snyder becoming executive producers and showrunners, replacing Monica Owusu-Breen. Additionally, two cast members from Season 1 — Sarah Ramos and Yul Vazquez — did not come back as series regulars.

Season to date, Midnight, Texas, which aired Fridays 9 PM until shifting to 8 PM last week, has averaged 2 million viewers and a 0.4 in 18-49 (Live+same day), which was down from the Season 1 average. Its Season 2 finale, which will be a series finale, airs next Friday.

Midnight, Texas, starring François Arnaud, takes a journey into a remote Texas town where nothing is what it seems. In Midnight, Texas, being normal is strange and only outsiders fit in. It’s a mysterious safe haven for those who are different — a perfect place for anyone looking to hide from the outside world.

READ  Barber Tells This ‘Shy’ Insurance Man To Grow A Beard, And It Ends Up Transforming His Life

Like Midnight, Texas, Marlon too got off to a solid ratings start in summer 2017. The sitcom, created by Wayans and  Christopher Moynihan, became that summer’s #1 new scripted series on the Big 4 networks in 18-49 and total viewers. Also like Midnight, Texas, Marlon’s second season, which averaged 2.6 million viewers and a 0.6 rating in 18-49, was down significantly from Season 1.

Loosely inspired by the real life of star Marlon Wayans, the family comedy centered on a loving (but sometimes inappropriate) father committed to co-parenting his two kids with his very-together ex-wife. While his misguided fatherly advice, unstoppable larger-than-life personality and unpredictable Internet superstardom might get in the way sometimes, for Marlon family really always does come first — even if he’s the biggest kid of all.

Moynihan, who has an overall deal at Uni TV, has two new comedy series projects in contention for next season, an untitled multi-camera half-hour family comedy with Jonathan Prince at Fox and untitled Silberman brothers at NBC.

‘Ghost In The Shell’ teased in these few short promos