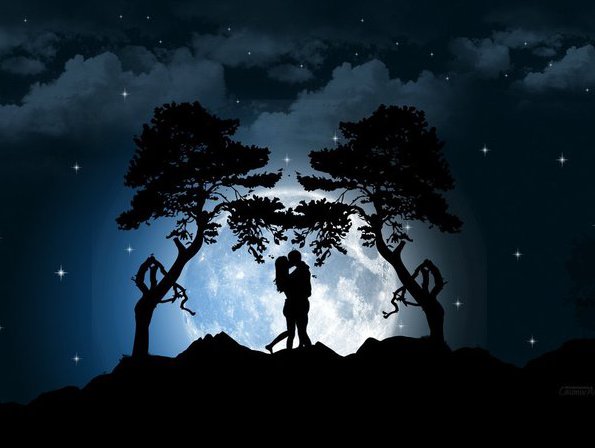 Rituals and rituals at the full moon

The Full Moon is the most favorable period for carrying out the rituals of purification from the negative – this concerns both rituals for cleansing the space, and rituals for purifying the aura, removing the spoiling, getting rid of all unnecessary.
The light of the full moon is illuminated by those things that interfere with our development, inhibit the growth of man as a person. In the full moon, rituals are performed to get rid of bad habits, such as drug addiction, malnutrition, painful attachment to someone, etc.

It is necessary to write on paper those things that you want to get rid of (habits, illnesses ….) Then solemnly throw all this into the fire. Ideally, this ritual should be done in such a way – you are going on the street with your friends, each writes a “note of deliverance,” lights a fire, becomes in a circle and in turn throws notes into the fire. Watch how your “problems” turn into ashes.
But if you do not have the opportunity to build bonfires, it will be enough to write down what you want to get rid of, loudly and distinctly read your desire and burn with a candle flame – ashes to merge into the toilet.

Ritual of cleansing the aura in the full moon

This ritual can be done at a time when you feel that you need to clear the aura of the accumulated negative. The best time for the ritual is the evening before bedtime. It must be carried out on a full moon or on a waning moon.
You will need:
7 spoonfuls of honey
7 spoonfuls of brown sugar
7 teaspoons cinnamon
Mix all the ingredients and before the evening shower, apply the prepared mixture to the body and leave for 7 minutes. In these 7 minutes you can read any prayer (“Our Father” or “Psalm 90”). Imagine that you are cleansed of the negative. After this, rinse everything off with cool water.
If you feel that you need a serious purification of the aura – do this procedure for 7 days.

This ritual has a dualistic meaning – purification from all negative emotions and thoughts, as well as preparation for meditation of obtaining lunar energy, entering the state of the so-called lunar trance.
Take the vessel – preferably a silver vase or goblet. If there is not one, you can take any other, but put a silver coin or other silver thing on the bottom. Fill the vessel with water and put it so that the light of the full Moon falls on the water for several hours. Then put the vessel in front of you and put both hands on it. Imagine, feel how the moon energy touches the palms and gradually spreads throughout the body.
When you feel that the flow has dried up, say the following spell:
Silver light of the moon,
Giving power and purity!
Cleanse me.
After that, scoop some water and moisten the points you selected on the body. In different cultures there is a system of energy centers on the human body: seven chakras – in the Indian tradition, three – among the ancient Celts (on the forehead, in the abdomen and on the big toes), five points roughly resembling the pentagram – among the Egyptians. The ritual of purification itself passed in different ways. In East Asia, the entire body was washed by holy water, in Africa and the Middle East – only hands and feet. Any variations are possible, you can even take a lunar bath. It is advisable to accompany the ritual with spells, then the force of its influence will increase. When you put your hands in the water, feel how powerful energy flow enters you, and everything that has become obsolete, from which it was necessary to be purified and get rid of, goes into the water … And then say the following words:
The moon, the mother of the night, the queen in the black sky, bless me and direct my thoughts.
Then, touching the selected points on the body and feeling the tide of the lunar force, turn to the Moon, call on her, ask her for help:
Mother Moon, strengthen my spirit, fill me with the power of creation, cleanse me from everything that is unworthy of your offspring.
Use similar small spells to accompany the touch.
At the end of the ritual, scoop some water and say:
I am pure and perfect, like a baby at the beginning of my journey. Thank you, Goddess. Be with me, help me to keep the lily of my soul in the silver of your light.
In ancient times, the ritual of purification was usually completed with a dance that gives a woman harmony with herself and the world around her. The dance was also considered a preparation for the lunar trance – the most important part of the ritual activities dedicated to the full moon. Exactly at midnight, the nine initiates began the next ritual.

READ  Lunar rituals for the fulfillment of desires

It is better to prepare for this ritual beforehand. Set on it will help silver jewelry and moonstone, white or silver color clothing. The sacred lunar number is nine (that is why the ritual was initiated by nine initiates), therefore it is necessary to have nine sacred objects, among which there must be a mirror, a candle and a silver vessel.
The moon is a woman’s beginning. She is responsible for intuition, in her power are dreams and the realm of the subconscious, the mystical plane of life. Receiving the power of the moon, a woman gains magnetism and a special charm. Lunar energy also allows you to gain strength for the implementation of your plans, for achievements and victories.
So, on the night of the full moon, at midnight, you can begin the ritual.
To do this, you need to find a space where the moonlight freely penetrates, stand in the circle of light and stretch out your hands towards the Moon. You will literally feel how your body gradually turns into a silver vessel filled with precious liquid. Disconnect from all external and completely give yourself to this feeling. When you enjoy this feeling and feel the power and desire in you, you can start meditation.
And the last part of the ritual action is working with a mirror. The magical properties of the mirror have been known since antiquity. Brass mirrors are mentioned in the Old Testament, and Egyptian papyrus tells of the polished silver plates used by the priests as mirrors. In the Middle Ages, the alchemists used the mirror as a magical instrument. Mirrors were made of an alloy of copper and silver.

READ  Lunar ritual to be lucky in love

The magic of the moon mirror

Working with a mirror is interesting because the power of the full moon can be taught not only during the full moon. This force can give a mirror. In total darkness, place it so that only the light of the full Moon falls on the surface. Turn to the moon. Then slowly start rotating the mirror clockwise, looking at it and concentrating energy. Thus, the mirror becomes a miniature twin of the Moon, which can also be used.
In the ritual, the moon mirror is used as a magic crystal. We must concentrate and with the help of the lunar mirror to solve any of our problems, get an answer to the question and even see the past. Peering into the depth of the mirror, say the spell:
The magic surface of the looking-glass,
Open the veil to me from the past. Through the ages
You will lead me into the shining stars.
And let the secret become a reality.
Through time and space penetrating,
Show me in a different guise.
There will be a picture from the past, the answer to the question will come.

Ritual of the lunar eclipse

Having performed the ritual of the lunar eclipse, you can get rid of diseases, bad habits, complexes, fear, mental weaknesses, spoilage and evil eye – that we are aware of inside ourselves as superfluous, unnecessary and harmful.
An hour before the eclipse, you should drink a slow sip of a glass of clean water, take a contrast shower. It is necessary to choose clothes of green color, to light a candle, to sit, looking at the fire, to think about your life. Look in the mirror and lay your head to the north. Relax, mentally see your reflection – as in a mirror. Think about the fact that it’s not you, but it (reflection) is sick, smoking, drinking, worried and shy, it’s it has complexes and problems. Reflection will begin to change. Squeeze it to the point and, on exhalation, send it away from yourself. Lie quietly. Stand up, put out (but do not blow out!) A candle. Take a contrast shower again. Drink a second glass of clean water.

There Probably Aren’t Different Strains of SARS-CoV-2 (Yet)