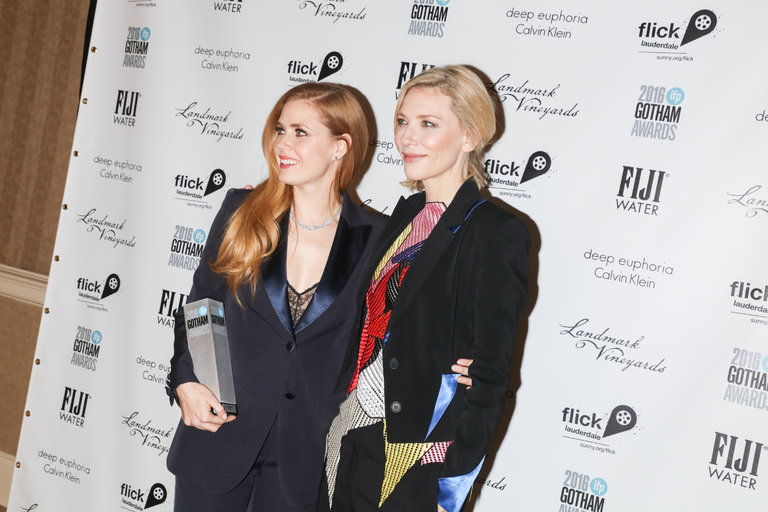 For those who track Oscar odds the way that other people follow horse racing or college football, the Gotham Independent Film Awards hold a special place. The awards, given by the Independent Filmmaker Project, and held, untelevised, at Cipriani Wall Street, are a kind of unofficial kickoff to campaign season.

They are not faultlessly reliable as an indicator of future Academy Awards, they are often an early straw poll for which way the winds may blow, at least for independent films. So the stars descend to thump their passion projects each November.

On Monday night, Cate Blanchett, Amy Adams, Annette Bening and Margot Robbie were all on hand. So, too, were next-wavers Anya Taylor-Joy, Sasha Lane and Royalty Hightower, the 11-year-old star of “The Fits,” who was wise-beyond-her-years enough to proclaim she was not nervous in the slightest. (Her director, Anna Rose Holmer, had the explanation: “She’s a star.”)

“Moonlight” and “Manchester by the Sea” were the year’s films to beat. Barry Jenkins, the director and screenwriter of “Moonlight,” was basking in the glow of what’s likely to be a long award season of heaped-on praise. And the thrill, he said, had not worn off yet. “There was a point where I thought I’d never hear that, so it’s all good,” he said.

“Moonlight,” in fact, swept every category it competed in, winning best feature, best screenplay, the audience award and a special jury award for its ensemble cast.

“Manchester” won its leading man, Casey Affleck, the best actor award. “This feels really good, I’ve got to say,” he said from the podium. “I didn’t think I cared this much.”

Isabelle Huppert was the surprise winner for best actress, for Paul Verhoeven’s rape drama “Elle.” Ms. Huppert gravitates toward challenging, unforgiving roles. “I’m afraid it comes from myself, yes,” she said before the awards began. “I should think about it, actually — maybe.”

Ms. Taylor-Joy, of “The Witch,” won the breakthrough actor trophy, and Trey Edward Shults won for breakthrough director for “Krisha.”

Between the competitive awards, the Gothams made time for a few tribute awards, including Ms. Adams (who was gushed over in her introduction by Ms. Blanchett), Ethan Hawke (introduced by his “Reality Bites” co-star, Winona Ryder), the producer Arnon Milchan and the director Oliver Stone.

“You can be critical of your government, we’ve forgotten that,” said Mr. Stone, whose latest film was about Edward Snowden, a government critic if ever there was one. Mr. Snowden “proved the existence of a global security state that many people suspected,” Mr. Stone said before the show, and he expects that the new administration (“definitely in that direction, very hard core”) would continue to surveil aggressively.

As the show stretched on to nearly three hours, it was hard not to think of the long road ahead for those who will spend the next few months promoting and campaigning.

“We do one night at a time,” Ms. Adams said. “I don’t count on anything or count anything out.”

like
On this topic: ()
Trump, Gatlinburg, Fidel Castro: Your Tuesday Evening Briefing
No one can hold animals and wear blazers like Mike Antonovich — and we’ll miss that