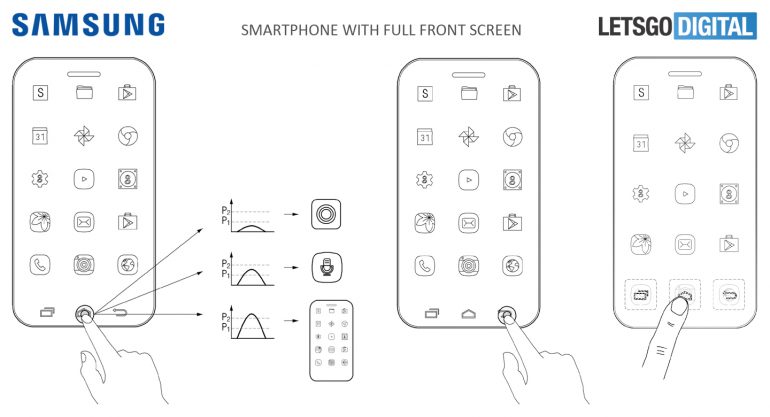 Samsung Creates an “iPhone X” without Bezels and Notch

Samsung is getting ready to take the wraps off the new Galaxy S9, but judging from the leaks that happened recently, only small changes are going to happen in terms of design. At least when viewed from front.

The South Korean firm, however, was one of the first to bet big on edge-to-edge phones, and naturally, it’s also one of the first trying to push this concept even further. And a recently-discovered patent provides us with a glimpse into Samsung’s vision for bezel-less phones.

Essentially, this patent imagines a smartphone not only that has no bezels, but which also comes without a notch. As Apple demonstrated already, the notch is needed to serve as the home of front-facing parts when an edge-to-edge screen is being used, in the case of the iPhone X for FaceTime camera and the module powering the Face ID facial recognition system.

But in Samsung’s smartphone patent, all parts are embedded into the screen, including, yes, you’ve guessed, a fingerprint sensor.

Basically, Samsung says this implementation could require a pressure sensitive display, so even though no bezels are being used, some features could be achieved by simply pressing harder on the screen – similar to what Apple users can do right now on iPhones with 3D Touch.

The on-screen navigation bar’s home button can be used as a fingerprint scanner when the device is locked. The same button gets users to the home screen when the phone is unlocked and a light press is detected, while pressing harder activates the microphone. Samsung could let users customize these gestures though.

READ  Nikon Updates Firmware for Its W100 Camera - Get Version 1.4

Although it’s still in patent stage, such tech could launch on the 2019 Galaxy S series, which according to recent speculation, could be called Samsung Galaxy X. But as with everything so early in the development stage, there’s no guarantee it’d reach mass production anytime soon.

like
On this topic: (Articles (En))
If Countries Were People
22+ Employees Share Their Worst Client Stories And Some Of Them Will Infuriate You