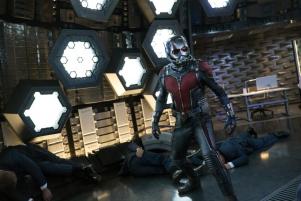 FRIDAY 11:44PM UPDATE: After showing exhibitors at CinemaCon that they are indeed the force to be reckoned with, especially with upcoming DC pics like Birds of Prey, The Joker and Wonder Woman 1984, Warner Bros. heads into this weekend celebrating a No. 1 win for its comic book label’s Shazam! with current Friday night estimates seeing $20M (including $5.9M Thursday previews) for a weekend of $51.5M.

We continue to hear that the New Line production is hooking a late night crowd well before Saturday matinees kick in. Some industry projections think Billy Batson can do the same amount of money on Saturday as Friday (including previews).

This is all very reminiscent of Disney/Marvel’s Ant-Man, when they decided to expand beyond their older fanboys into families.

Overall CinemaScore for Shazam! is a solid A, like Ant-Man and Wonder Woman, but better than Aquaman‘s A-, Justice League and Suicide Squad‘s B+ and Batman v. Superman‘s B. In Screen Engine/ComScore PostTrak exits, Shazam! drew 25% under 18, with males under/over 25 essentially equal at 33%. Kids and parents combined repped 25% of the audience and both gave this superhero Big-liked pic 4 1/2 stars each. Kids under 12 give it a 72% recommend, while general audiences enjoyed Billy Batson at 4 stars, 61% recommend. Diversity breakdown was 53% Caucasian, 17% Hispanic, 13% Asian and 11% African American. All super stats.

Many B.O. analysts had a feeling that Shazam! would over-index due to what they were seeing on social media. RelishMix reports that the viral rate of four trailers for the superhero pic stands at 129:1, “far and above the superhero standard of 37:1.”

In regards to the positive word of mouth for Shazam! RelishMix says folks online “are shouting that it’s by far the best DC film so far, very funny and entertaining.  Some even compare it to Captain Marvel saying this is the movie they were hoping for. There’s an ongoing feud between Marvel & DC Fans related to the very name, Captain Marvel’” Shazam was renamed and formerly known as Captain Marvel despite being a DC character/hero. Regardless, others are intrigued by leading man Zachary Levi, and like what they see in Mark Strong as the villain – and are loving how the trailers worked in the Eminem song.”

A lot of that WOM was spurred by Warner Bros/New Line advance screenings for the film (both free and paid screenings through Fandango which rang up a record $3.3M next to other family film/partnership screenings). Add that into the 3-day and the running stateside total is $56.1M. Nancy’s sources say Shazam‘s foreign B.O. should definitely cross $100M.

At $24M, Paramount’s Pet Sematary is solid counter-programming in second place. The Stephen King feature adaptation’s start is in the realm of other average horror pic starts like Happy Death Day (PG-13, $26M), 2013’s Evil Dead remake ($25.7M), and just under 2016’s R-rated original Don’t Breathe ($26.4M). However, profit wise it’s a whole different animal: $20M+ is a huge opening win for Blumhouse because they budget their pics in the low-to-mid single digits (before P&A). Pet Sematary cost a reported $20M. Still low, but not Blumhouse wow. If Pet Sematary climbs to $30M, that’s impressive, but many are expecting this pic to drop given its exit scores.

Evil Dead is likely the best comp here for Pet Sematary: It’s a remake of a well known horror pic, they’re both rated R, both have the same exact Rotten Tomatoes score of 62% fresh, cost around the same amount of money (Evil Dead was made for $17M before P&A) and both earned C+ CinemaScores. Weekend 2 of Evil Dead declined 63% and the pic ended its stateside play with a 2.1 multiple with $54.2M.

READ  Jeep Finally Reveals When The Wagoneer Will Return

Civil Rights drama The Best of Enemies from STX is looking at $1.75M today and an estimated $5M opening for the weekend in 6th place. STX claims that they spent net $10M before P&A. Unfortunately, even if the company claims that they’re going to profit off this, the optics aren’t dazzling.

Green Book isn’t the right comp to this movie even though it’s opening was just $500K more with $5.5M at 1,063 theaters (and that was part of a week long launch, initially platformed). Green Book had a huge amount of awards season groundswell, great buzz, won TIFF, was flying under the radar and became discovered. The Best of Enemies, despite its good intentions, is a movie playing outside the August-December awards corridor with a 50% Rotten Tomatoes score, so that unfortunately tells you the pic’s prospects right there.

The results for Best of Enemies are reminiscent of Focus Features’ Jesse Owens movie Race. This despite the fact that the Taraji P. Henson-Sam Rockwell movie skewed toward females at 59% on PostTrak, whereas Race leaned toward guys at 52%. Both movies had excellent exit scores with solid ‘A’ CinemaScores (also Enemies has a 70% definite recommend, and 4 1/2 stars), but both movies didn’t have great reviews (Race was 61% fresh). And if you’re a drama, and you wanna rally at the box office, that’s a basic requirement. Women over 35 gave the movie an A+. Just like Race, there’s a disconnect between audiences and critics on this film. Race opened to $7.3M on more theaters than Race–2,369–and did a 2.6x multiple. Of Race‘s audiences, 38% were African American versus 25% for The Best of Enemies. Caucasians at Race numbered 45% to 54% at Enemies. As we said with Race, if you start out this low at the B.O. with exits that high, the picture isn’t going to go anywhere.

like
On this topic: (Other)
Can Pigeons Really Read
The First Computer-Generated Bacterial Genome | SciShow News

Cubs 6, Giants 5 | Chicago wins series, 3-1: Cubs Oust Giants to Reach N.L.C.S., for Once on Good Side of a Big Rally
Recent Posts