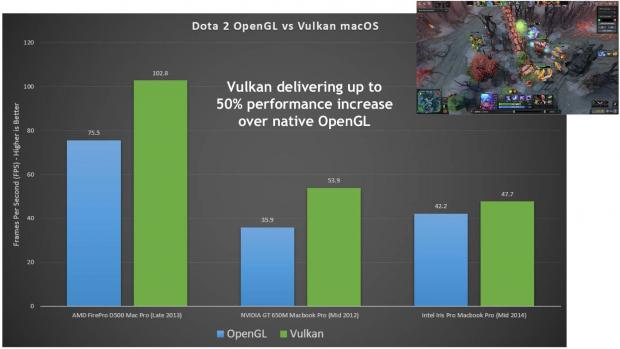 The Khronos Group, the open-source organization behind the Vulkan graphics API announced today that it’s been working with Valve, LunarG, and The Brenwill Workshop to enable Vulkan applications to run on Apple’s macOS and iOS operating systems.

The Vulkan Working Group’s Portability Initiative has been released today as a way to enable Vulkan apps and games to be ported to Apple macOS and iOS platforms, thus making games run faster than with the Metal API. It comes in the form of a collection of free and open-source tools, runtime libraries, and SDKs.

These will finally enable game developers to port their Vulkan games to Apple’s macOS and iOS operating systems. Valve will be the first to release a free Dota 2 update with Vulkan support for macOS in the coming months, promising significantly higher performance than the OpenGL port.

“We have been running substantial production loads through the Vulkan tools on Mac, including Dota 2 which is now running faster than the native OpenGL version,” said Valve’s Pierre-Loup Griffais. “These efforts are aimed toward reducing development and porting costs for any developer supporting multiple platforms.”

While the Khronos Vulkan Portability Initiative wants to refine and define a universal portable subset of Vulkan 1.0 allowing apps and games to run at native performance levels over Apple’s Metal and Microsoft’s DirectX 12 graphics drivers, The Brenwill Workshop released today the MoltenVK library for Vulkan/Metal compatibility on macOS and iOS.

like
On this topic: (Articles (En))
The Perfect DIY Pinboard
Finnish Photographer Shoots Real Life Angry Birds, And We Can’t Finish Looking At Them